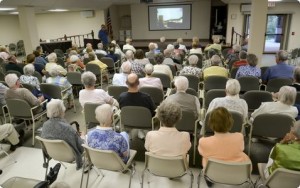 Just before the anniversary of 9/11, a retired air traffic controller recounted the events of that day at a presentation for Phoebe Berks independent living residents.

Mal Fuller was watch supervisor of the Pittsburgh International Airport air traffic facilities on 9/11/01. Shortly after the Pentagon was hit, Fuller evacuated the control tower and radar room in Pittsburgh when a hijacked plane thought to be carrying a bomb was headed directly for the airport. The plane was later determined to be United 93 which crashed near Shanksville, PA and the 40 passengers and crew on board would be remembered as heroes.

Staff from The Reading Eagle newspaper attended the presentation and interviewed some of the seniors in attendance. Rev. Kenneth Dearstyne, a World War II vet recalled the similarity between the 9/11 attacks and the attack on Pearl Harbor when he was only 16 year old.

Another resident, Rev. Walter Krieger, was torn between consoling his parishioners and worrying about his two children who both worked in New York City at the time. Luckily, both children were safe but ended up moving out of the city within a year of the event. Fuller serves on the Flight 93 Memorial board and all proceeds collected during the presentation were donated to fund the memorial.