Allentown, PA– The Relationships issue of The Phoebe Messenger
magazine received a Gold 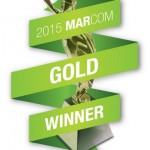 MarCom Award in the non-profit magazine category, the third issue in three years to be awarded the honor. Administered by the Association of Marketing and Communication Professionals, MarCom Award serves to recognize outstanding creative achievement in categories such as print media, strategic communications, digital media, and audio/video.

The Relationships Issue, published in Winter of 2015, featured stories on residents engaging in lasting, meaningful relationships with family and staff, with one another, and even with pets in their Phoebe communities. These include two sets of siblings residing at The Terrace at Phoebe Allentown, the lifelong connection of a UCC minister’s family to the Allentown campus, and the special companionship between two residents at Phoebe Berks Village.

MarCom Award entries are judged by industry professionals who look for work that exceeds industry standards and serves as a benchmark in the industry. The international competition is one of the largest of its kind in the world, receiving over 6,500 entries last year from the United States, Canada, and more than a dozen other countries. Entrants comprise a range of organizations, from local ad clubs to media conglomerates and Fortune 500 companies. Only about 23 percent of entries received the Gold Award last year.