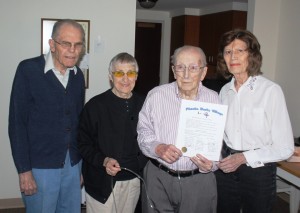 Phoebe Berks residents pose with Warren Blatt upon his citation for 16 years of faithful service to the dart baseball league at Phoebe Berks.

Warren is his name. Dart baseball is his game. Since 1999, Phoebe Berks resident Warren Blatt has served as official commissioner, logger, and scorekeeper for the Phoebe Berks Dart Baseball League. Recently, Blatt put his pencil and scorecard down and retired.
Check out these impressive stats:

Before living at Phoebe Berks, Blatt worked as scorekeeper, announcer, and traveling secretary for the Rising Sun Sunners of the Fast Pitch Softball League. He frequently roomed with Ty Stofflet, who is often regarded as one of the top softball pitchers in the history of the sport.
In October, Blatt was presented with a special citation, signed by all current dart players, thanking him and commemorating his 16-year contribution to the success of the Phoebe Berks Dart Baseball League.