Learn more about the special screenings of Age of Champions at Allentown’s Civic Theatre in October. 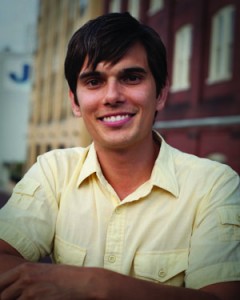 Keith Ochwat, Producer of Age of Champions and Managing Director of the Documentary Foundation

Age of Champions is the inspiring story of a group of athletes—a 100-year-old tennis champion, 86-year-old pole vaulter, team of basketball grandmothers, and a pair of swimming brothers—all chasing gold at the National Senior Olympics. The film captures the triumphant spirit of these competitors as they tackle the challenges of old age with grace, humor, and optimism.

Age of Champions made its world premiere at the 2011 Silverdocs Film Festival and was heralded by the Washington Post as “infectiously inspiring.” Athletes featured in the film have received wide attention from the national media, including NBC Evening News, CNN, The Regis & Kelly Show, ABC News, NPR, and a cover story in Washington Post magazine.

This year, the Age of Champions filmmakers launched a nationwide grassroots screening initiative in partnership with the AARP, National Council on Aging, and National Senior Games Association. The film is slated for a national PBS broadcast this fall.

We are all aging all the time, but ‘aging’ can mean vastly different things to different people. Some may choose to view it in a negative light—it means you slow down, your life becomes smaller, and your opportunities become increasingly limited. But there are others who choose to view aging more positively—for them, aging means more confidence, more time to pursue your passions, and the ability to focus on what you love doing most in life.

Healthy aging is about making thoughtful daily lifestyle choices that will improve your physical and mental wellbeing. Exercise, a healthy diet, and strong relationships with friends are equally important in tackling the challenges of age with positivity and strength. When discussing healthy aging, it is important to remember that by taking care of our bodies, we are also taking care of our minds. People with more positive views of aging live an average of 7.5 years longer than those with less positive views of aging.

Staying active and embracing preventative actions in curbing chronic disease are more important than ever. This film is an exciting new way to not just think about aging but also perceived limits and stereotypes many are all too quick to accept as truth. Age of Champions tells the story of athletes that know no boundary due to their age and many in the aging field have found this story to be illustrative of our ability to change perceptions on aging.