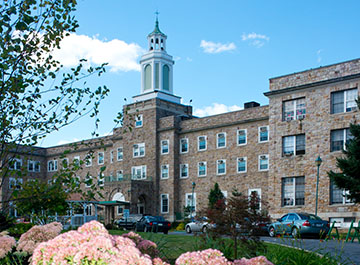 LifeAire Systems is based in Allentown and was founded by CEO, Katy Worrilow, Ph.D., a leading embryologist who spent more than 20 years researching the causes of positive and negative spikes in clinical outcomes in In Vitro Fertilization (IVF) laboratories. Worrilow started LifeAire Systems to address air quality issues affecting the labs. The LifeAire team designed an in-duct air purification system that removes all airborne chemicals and biological pathogens, and prevents the spread of airborne infection. In addition to being installed in more than 50 leading IVF labs in the U.S., the system is being used in operating rooms, intensive care units, neonatal intensive care units, and critical care areas within hospitals.

Phoebe Ministries, which has four continuing care retirement communities in Eastern Pennsylvania and is known for its forward-thinking senior services, was recommended to LifeAire for researching product performance in a post-acute care setting.

In December of 2016, Worrilow approached Phoebe’s leadership team with a proposal to install their air purification system into one of Phoebe Allentown’s long-term care neighborhoods at no cost to study the air quality and the consequential remediation of airborne pathogens and volatile organic compounds (VOCs). Phoebe unanimously agreed to participate in the study, and the collaboration began.

“I was so impressed by LifeAire and Katy Worrilow,” said Sue Schlener, Executive Director of Phoebe Allentown. “Their immediate focus was to understand our senior community and defer to our needs,” said Schlener, a registered nurse who has served the seniors at Phoebe for over 25 years. She and Worrilow shared their respective expertise and engaged their interdisciplinary teams to discern precisely where and when to install the custom-made, patented LifeAire technology in the historic Phoebe Allentown building. Additionally, a third party was formally enlisted to conduct a thorough, double-blind research study.

The 15-month study included a residential control floor with HEPA filtration, which is currently the standard for long-term care air quality control, and a residential study floor with LifeAire’s advanced air purification technology (AAPT). Cleaning and clinical standards of operating procedure across both floors remained the same. Airborne and surface sampling were initiated in five areas per floor. Sample analysis was completed by a third-party industrial hygienist laboratory and included the identification of bacteria, fungi, and VOCs.

The outcomes from the research study were overwhelmingly positive for the long-term care setting. The AAPT reduced the levels of infectious airborne and surface pathogens by 89.1% and 88.9%, respectively, and the levels of VOCs by 90.2%. It was also found that airborne and surface pathogens constitute a significant source of infection, and that VOCs negatively impact residents with compromised respiratory systems, like those who have chronic obstructive pulmonary disease (COPD).

“This system is truly a game-changer for the health and well-being of seniors who live in congregant settings, and the overall operations of any skilled nursing health care center,” said Schlener. “The Phoebe staff, including the leadership team, were blown away by the outcomes of the research.” The cascading effects of lowering infection for seniors living in a long-term care setting are dramatic.

In addition to increased quality of life for Phoebe’s residents, the number of secondary health effects like falls, which are sometimes caused by underlying infection-related issues, decreased. Additionally, as a pilot, the economic impact was notable. As a result of improved resident wellness, there was a reduction in financial and insurance services, a reduction in citations for infection breakout, increased referrals from healthcare network providers, and decreased insurance costs. Additionally, there was a substantial reduction in staff call-outs due to a decrease in illness.

Phoebe Allentown has long been a center of discovery and innovation for the best possible practices and interventions used in serving Pennsylvania seniors. Phoebe was honored to be the first skilled nursing community to pilot this cutting-edge, health-changing technology.