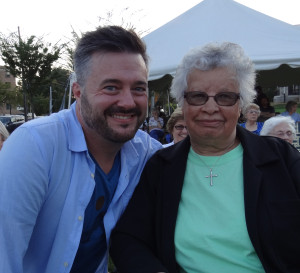 The 107.5 Alive Boyertown radio station brought contemporary Christian singer, Mark Smeby to perform an outdoor concert at Phoebe Allentown in September. Smeby sang a number of famous songs such as “Mary Did You Know” and “Pilgrim Man” to an audience of residents, staff, volunteers and members of the community. The uplifting and upbeat performance was a beautiful way to spend an evening outside under the moon and the band shell never looked better! Smeby was both entertaining and endearing as he talked about the personal connections in his songs. He spent extra time before the concert saying a personal hello to those in attendance and arrived early to take a tour of Phoebe Allentown Health Care Center. Smeby’s grandmother was one of the founders of the International Alzheimer’s Association and he was especially interested in hearing about Phoebe’s specialized dementia programs.

Radio personality, John Yoast from 107.5 was also at the concert and played radio interviews with Phoebe staff and volunteers on the days leading up to the concert. Phoebe is grateful to have friends such as John and Mark to share their gifts and bring exposure to our ministry.