The Brain Fitness center is no ordinary gym. You won’t find free weights or treadmills, exercise bikes or stair climbers. And the trainers aren’t likely to be wearing workout attire.

Instead, what you will find at the Brain Fitness Center at The Terrace at Phoebe Allentown are computer stations with easy-to-use, but progressively challenging, software program designed by Posit Science to exercise the residents’ minds to help keep them mentally healthy.

Phoebe joined with Penn Treaty Network America Insurance Co. and Posit Science to make the program a reality on Phoebe’s Allentown Campus. This unique program is based on new scientific findings that have revealed the brain to be more adaptable than once thought. Through a process called plasticity, the brain may have the ability to change, adapt and even reorganize itself with regular use of intensive, repetitive and progressively challenging activities, like the Brain Fitness Program. It may also help stave off debilitating diseases like Alzheimer’s disease. Underwriting support from Penn Treaty and Posit Science helped make implementation of the Brain Fitness Center feasible.

“Just as physical fitness can strengthen our bodies, mental exercise can enhance the way our brains function,” explained Steve La Pierre, Penn Treaty’s executive vice president of insurance operations, during a planning session with Phoebe staff and residents. He continued, “As a long-term care insurer, one of the most important things we’ve learned is that the number one and most costly reason people need long term care is due to Alzheimer’s disease and dementia.”

One of the graduating students from the inaugural session, Phoebe Terrace resident Margaret Teitsworth, gave an inspirational testimonial about the positive changes she experienced in her life from taking the program. “After completing the program, my head feels clear and it’s easier to recall words and names. Instead of feeling drained after each class, I began to feel exhilaration,” she said. Margaret, who plans to volunteer as a coach in future classes, said she will continue doing the brain exercises using the software on her own computer.

To register for the next class which is open to the public, call 610-794-MIND. 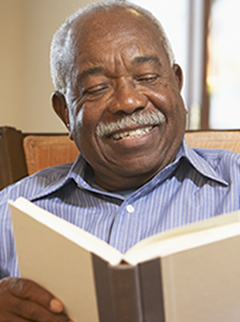