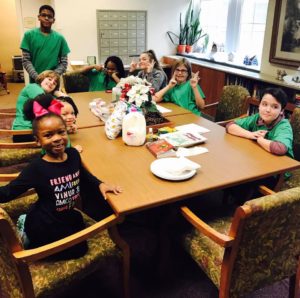 Phoebe Wyncote welcomed future leaders of the community on December 27, 2016, in an effort to bring together older adults and children for a day of mutual engagement and interaction.

Phoebe Wyncote Future Leaders Day was initiated by Phoebe Wyncote staff leadership to give children an opportunity to learn how to speak with and help older adults—and of course, the residents are delighted for any excuse to see children in their own neighborhoods.

All together, 10 children between the ages of three and 14 participated were brought into the program by their parents, who are employees of Phoebe Wyncote. Arriving in the morning, the future leaders were given matching green t-shirts and escorted into an orientation with Wendy Williams, LPN at Phoebe Wyncote.

After a brief orientation—including some pointers on speaking and listening to older adults proper wheelchair handling—the future leaders moved up to the skilled nursing neighborhood, where they helped the residents with a craft project: painting angels for Christmas tree ornaments.

Lunch followed along with some playtime and then it was time to practice for the afternoon’s big event: a talent show featuring the day’s guests. The star-studded acts included singing, dancing, and instrumental performances—to the lasting delight of each audience member. That afternoon some residents also got the chance for a manicure courtesy of their youthful guests.

Kelly Wright, Administrator of Phoebe Wyncote, says the program is likely to repeat next year, thanks to its resounding success with the residents and the children alike. “The kids had a really great time and there was a lot of positive feedback from the parents,” says Wright.

“The kids’ role that day,” Wright explains further, “was to help. It was about getting close to someone you might not have gotten close to before, making new friends, and making someone smile.” She says the program was intended to teach children that older adults aren’t anything to be scared of—that they’re approachable and like everyone else they need joy in their lives.

“It was about seeing the coolness of something we might not have thought was cool before,” she says.