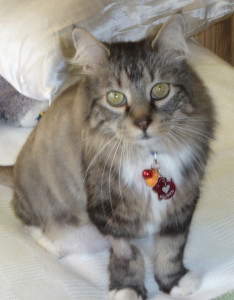 Since June, Last Chance Ranch (LCR), a no-kill shelter outside of Quakertown, has been visiting Phoebe Richland Health Care Center weekly in order to bring pets into the lives of residents. “They bring cats, dogs, and even farm animals,” says Tracy Roman Executive Director of Phoebe Richland. “It is a big hit with residents and staff!”

The organization is not new to Roman as she adopted two of her three dogs from their shelter and recently helped her father to adopt a dog from LCR. She also knows how good it is for elders to interact with animals. Studies have shown a reduction in blood pressure, anxiety and depression, and a boost in immunity. In addition, a reduction in the number of anxious outbursts from people with Alzheimer’s disease was noted when there was a pet in the home, according to WebMD.

The partnership between the organizations is not only beneficial for Phoebe residents but for the animals, as well. Since the visits began, a nurse’s aide gave one of their puppies a new home and everyone has a new awareness of the vital animal rescue center that is only a few miles from their community.

When Phoebe Richland staff members were looking for a cat to live in the facility and provide companionship to residents, the first place they thought of was their friends at LCR. Greyson has been living in the skilled care community since August and enjoying every minute of the love he is receiving from so many grandparents.

“When we first adopted him we had him shaved since he was long-haired and in need of a grooming,” says Dawn Murphy, Admissions Counselor. “The groomer left a puff of fur on the end of his tail. He received many compliments and laughs from the residents as he traveled down the hall with that funny tail up in the air.”

Volunteer Coordinator, Suzy Sabo adds, “Greyson wears a device that disables the automatic doors if he is too close to them. He is so smart that when he sees me walking from the parking lot, he moves around the corner and waits for me to get in the building before he greets me.”
Phoebe Richland is also organizing a drive for food and supplies that will be donated to the ranch. “I am a huge animal fan and I especially love dogs,” says Roman. “It is great to be able to combine my passion for seniors with my passion for animals in this way and we hope to continue partnering with them.”