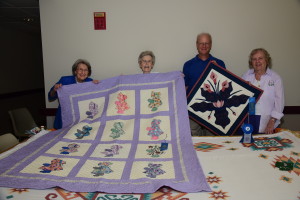 A Phoebe Berks quilter proudly received three blue ribbons in the Reading Fair in August, one on behalf of the quilting group that meets regularly in the Phoebe Berks Village. Suzanne Romig and Grace DeLong, both Phoebe Berks Village residents, were present to receive the award for a twin bed quilt they crafted together with the quilting group. The group is made up of five quilters Suzanne Romig, Grace DeLong, Donna Hartz, Pauline Himmelberger, and Derrick Clouser. Clouser is an employee at Phoebe Berks who comes an hour early to work on quilting days and helps with whatever project is current. They meet together about twice a week for an hour or two at a time, and if one of the women has a spare half hour she comes and quilts on her own.

One of the winning designs, an old-fashioned pattern called Sunbonnet Sue which dates back to the 1930s, was pieced together from squares found in Romig’s mother’s collection. The other, a wall hanging design of calla lilies, was made by Romig out of pieces bought at a scramble table. It’s one of what the group calls “lap quilts”, referring to smaller pieces that the members make at home on their own.

The third quilt—a larger queen-size bed quilt—was made by a group at the Lincoln Park United Methodist Church in Reading. Romig belonged to that group before it disbanded and says the winning quilt was the last one the group made together. Its design is called Grandmother’s Flower Garden, a pattern of interlocking hexagons cut to resemble flower petals.

Romig has been at Phoebe for 10 years and quilting for 35. Her mother was a quilter before her, but it wasn’t from her mother that Romig learned the craft. After her mother passed, Romig gathered up all of the remaining quilting supplies and scraps of fabric and decided she would learn for herself how to put them together. She began taking an evening class and started a quilting group at her church. When she came to Phoebe Berks in 2006 she joined a group already in existence there.