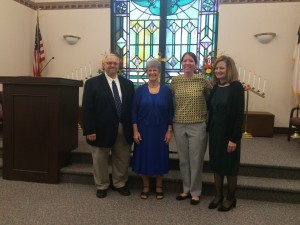 Chaplain Naomi Kolb Dublanica retired from her position as part time chaplain at Phoebe Berks this fall. Chaplain Naomi has been a valued asset to the Phoebe Berks community since completing her Clinical Pastoral Education internship with Phoebe in 2006. Phoebe Berks residents and staff members had a chance to offer good wishes at a farewell service and reception in September.

Chaplain Naomi had a long career as a local physician before retiring and being called to the spiritual service of others. She is a member of St Paul’s UCC in Amityville, Berks County. During her tenure at Phoebe Berks, she developed the curriculum for and facilitated a “grief and growth” group for those whose loved ones died in the past year.