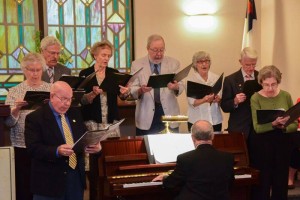 Phoebe Berks celebrated its 25th Anniversary in September with a service and special dinner reception for independent living residents.

During the program, which took place in the chapel and was broadcast live in the auditorium and throughout the building, remarks were given by Scott Stevenson, President and CEO and Star High, Executive Director of Phoebe Berks. The Rev. Gene Aulenbach, a former Phoebe Berks Board member and Lisa Fichera, Chief Operating Officer, both spoke of their time in the organization when Phoebe embarked on the Berks project and recalled the excitement about the expansion into Berks County.

A citation was presented by Pennsylvania State Senator, David Argall, a time capsule was sealed in preparation of placing it in a wall in the community center, and the campus was rededicated by Phoebe Berks Chaplain, Rev. Leah Knox.

Special moments in the service included the performance of two songs by members of the Phoebe Berks Choraleers accompanied by Rev. Robert Masenheimer on piano. The lyrics of “A Mission to Fulfill” were written by Rev. Fred Blumer while “We Are Phoebe” was written by Ellie Oberly. Rev. Masenheimer wrote the music for both songs.

Stanley Parr, the first person to occupy a newly finished cottage on the grounds of Phoebe Berks in 1991, continues to live independently and shared memories of the early days of the community when Rev. Barry Galley, the administrator at the time, initially welcomed the handful of new residents onto the campus and made them feel at home.