What You Missed at Phoebe | Phoebe News and Updates | Phoebe

What You Missed at Phoebe 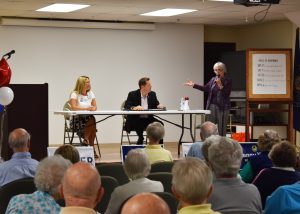 On October 2, Phoebe Berks Village held a “Meet the Candidates Forum” for candidates of both the 129th Pennsylvania House of Representatives District and the 9th Congressional District seats, up for re-election in November.

129th district incumbent, Jim Cox (R) and his opponent, Tricia Wertz (D), were present, as well as Denny Wolff (D) of Millville, candidate for the 9th Congressional District. Dan Meuser (R), Wolff’s opponent for the House seat, was invited but did not attend the debate. Residents of the independent living community had the opportunity to hear the candidates debate on pressing issues, including employment rates and job creation, birth control and abortion, and gun laws. 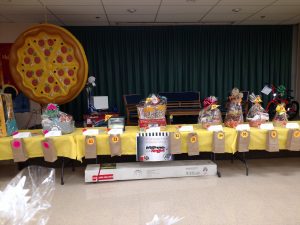 Once again, people turned out in droves to support Phoebe Allentown’s annual basket social, which traditionally raises funds for community life programming and pets in the health care center. This year the basket social was held on October 4 and 5; 116 baskets were donated and $10,200 raised from both the auction of baskets and sales of food and baked goods.

The basket social is designed to support the Circle of Life initiative and community life at Phoebe Allentown. The Circle of Life was created to enhance the lives of residents of the Phoebe Allentown Health Care Center, and to make the living environment as homelike as possible. The fund supports musical programs, the care and maintenance of pets and plants, and special programs with local children. The fund also supports Trick or Treat night, tickets to local events for residents, and much more. Employees and volunteers spend months arranging and organizing the basket social, which is the chief fundraiser for the community life department.

Anyone can participate in the basket social! Look for news about next year’s event, or contact us at 610-794-5126 to learn more. 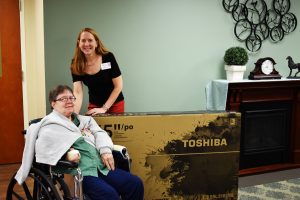 Residents of Phoebe Richland Health Care Center received an exciting new addition to their community in September, thanks to the generosity of Jim Bingham, co-chair of the Golf Committee, who won the TV as a raffle prize for the Phoebe Ministries Golf Tournament in August. A 52-inch television will be installed in a remodeled resident common area in the health care center, affording residents the opportunity to enjoy daily and special programming on the latest in viewing technology.

Phoebe accepts donations in any form throughout the year. If you would like to support life enrichment opportunities for our residents, please visit phoebe.org/giving or call 610-794-5132 to learn more. 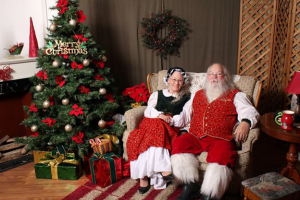 You better not pout, and you better not cry because Santa Claus is at Phoebe Allentown! Santa A. Claus (yes, that’s his real name!) took some time off from his busy holiday schedule to recover in Phoebe’s short term rehabilitation after some recent health issues. After a positive experience with his recovery at
Phoebe in the past, Mr. and Mrs. Claus decided it was the perfect place for Santa to relax and recuperate in preparation for next Christmas.

Mr. Claus got his start as a mall Santa in the early 1980s after he gained weight during his recovery from a severe car accident. Realizing he looked better than the Santas at the mall, Mr. Claus decided 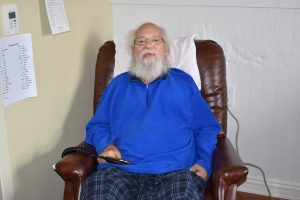 to become the official Santa at the Lehigh Valley Mall. By 1995, he had legally changed his name to Santa A. Claus, to “make it as believable as possible for the kids,” he explained.

Mr. and Mrs. Santa A. Claus have spent 35 years bringing joy to children by touring up and down the east coast, including a stop at the Mall of America, where Mr. Claus was the first official Santa for the famous shopping and entertainment center. They even owned a farm with 12 reindeer, training them to be docile enough for any child to ride and pet.

After meeting Santa A. Claus, it’s impossible not to believe in Christmas magic.