Allentown’s motto, “A City Without Limits,” is an especially poignant sentiment at this time in the history of the city. Recent improvements and additions to downtown Allentown have sparked a sort of renaissance. The popular new PPL Center has brought in a wave of tourism, and new businesses and restaurants are popping up everywhere.

Residents of the Terrace at Phoebe Allentown were kept abreast of the exciting changes with a personal visit from Mayor Ed Pawlowski. On September 22, he visited the Terrace to give a slideshow presentation about all of the new and future projects happening in the city. Mayor Pawlowski talked about plans for a new skyscraper that will exceed the height of the PPL building, which drew a surprised response from the crowd of about 50 residents and staff members who completely filled the lobby of the Terrace. 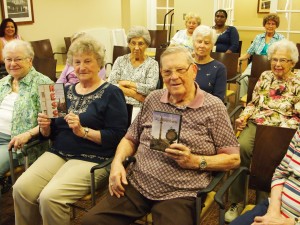 In the same week, Terrace residents had
the pleasure of viewing two documentary DVDs produced by PBS 39. One documentary was about the history of the city, while the other was specifically about Hess’s department store and its influence
on tourism and shopping in the 100 years that it was headquartered on Hamilton Street.

Later in the season, on November 6, a group of Terrace residents took a trip downtown to enjoy lunch out at the new Chickie’s and Pete’s restaurant. After lunch, Mayor Pawlowski and PPL Center staff members took the group on a private guided tour of the PPL Center arena.