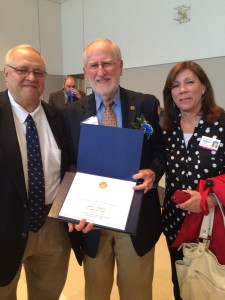 Stan Harwick received a Lehigh County Unsung Hero Award from county commissioners Brad Osborne and David Jones as part of “Older Americans Month.” The unsung hero award is given to active seniors who are making a difference in our community through their volunteer efforts and display exceptional generosity with their time and talent to enhance the lives of others.

Stan has enhanced the lives of residents at Phoebe since 1994, giving of his time and talents in many ways throughout Phoebe’s Allentown community. He drove residents to special events in Phoebe’s accessible van up to three times a week for 22 years before retiring last year at the age of 87. This volunteer position not only included driving but also physically securing residents and their wheelchairs in the van.

Retiring from driving didn’t mean Stan was ready to stop volunteering. As a long-time member of the Phoebe Ministries’ Church Relations Committee, he knew that the pastoral care director needed some administrative assistance. He now spends two mornings a week as a clerical volunteer, which supports the work of seven pastors in Phoebe’s four continuing care retirement communities and continues to serve on Phoebe’s Church Relations Committee.

As if all of the hours he dedicated weren’t enough, last Christmas, Stan led a project which was featured in Sawdust magazine. The woodworking group to which he belongs, the Penn-Jersey Scrollers, created 365 wooden Phoebe tree ornaments to give as gifts to Phoebe’s skilled nursing residents at their annual holiday parties. Stan worked with Phoebe’s marketing department to make a logo pattern and to check that they were using the exact “Phoebe Green” paint on the ornaments.. He and a few helpers painted all of the ornaments by hand before delivering them to the Community Life department at Phoebe Allentown. Many of the ornaments can be seen hanging from resident’s doors and windows.

Stan’s generosity of time, flexibility, and quality of customer service to our residents and staff has been greatly appreciated over the years. He is respectful of residents, displays genuine interest in each person and is attentive to their needs. Phoebe is so thankful that he continues to be committed to service at Phoebe!