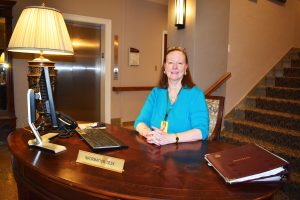 In August of this year, Phoebe Allentown unexpectedly lost one of our most dedicated and beloved volunteers, Harriet “Midge” Coker. For almost 34 years, Coker was an unstoppable force for good in the Phoebe Allentown Health Care Center. She answered any request, reorganized entire systems, and spearheaded large-scale events, all with grace and impeccable attention to detail.

In 2018, Coker was honored by LeadingAge PA with the Distinguished Service Award for Volunteer of the Year for the state of Pennsylvania. When interviewed about her award, she said, “I’ve done lots of different jobs and worked on many projects. I’ve met so many people who became good friends. Thirty years later, I’m perched at the information desk almost every Wednesday. I think it’s fair to say I love my job!  And I love Phoebe!”

Sadness for the loss of Midge Coker is palpable throughout the Phoebe Allentown Health Care Center as volunteers and staff members have been preparing baskets for the 23rd Annual Basket Social in September, which she was a large part of. Coker helped streamline the ticket process, created donor spreadsheets, and cultivated new business contacts – helping to transform the basket social into an event that continuously raises more than $10,000 annually, benefiting community life and Phoebe’s resident activities.

Coker also ran Operation Santa, Phoebe Allentown’s resident holiday gift-giving program, for the past seven years. She organized spreadsheets listing all Health Care Center residents and their holiday wishes, sale-shopped throughout the year with specific seniors in mind, and secured donations from area businesses. “Midge was Operation Santa!” exclaims Bobbi-Jo Novogoratz, Administrative Assistant for Nursing in Allentown and Coker’s friend for over 33 years. “Midge always gave 150% of herself in whatever she was doing. She will be missed by everyone…employees, residents, visitors, and volunteers.”

As Phoebe Allentown prepares for the basket social and holiday season without Coker, we will continue to mourn her loss while also sharing joyous stories about her incredible smile and fiery passion for the seniors at Phoebe Allentown.