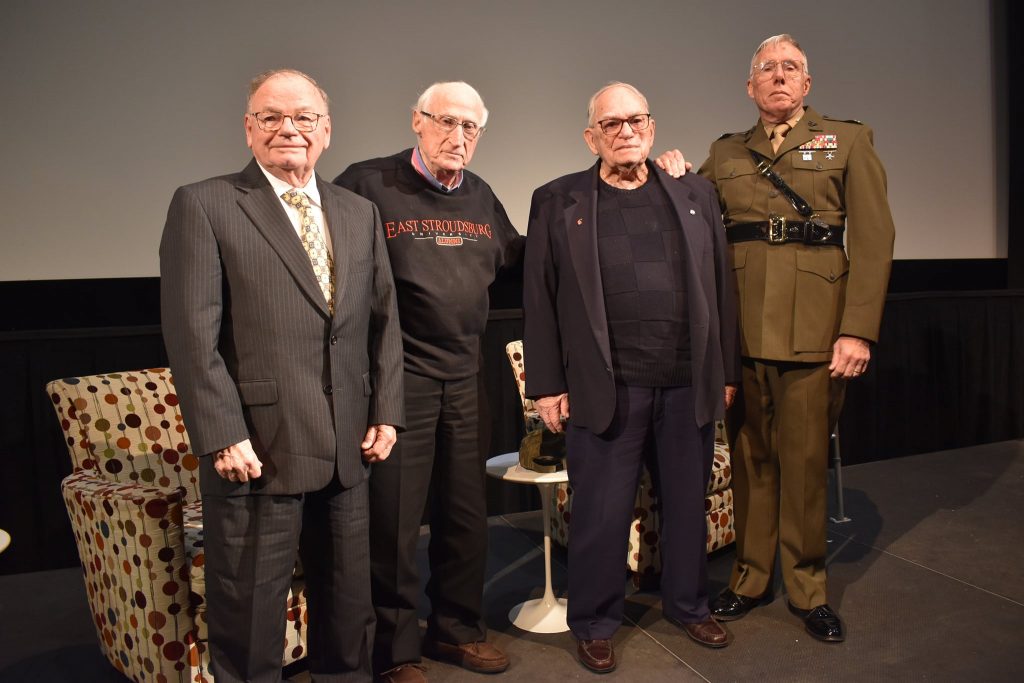 Phoebe Terrace Korean War Veterans Richard “Dick” Reider, who was a U.S. Army Corporal, Louis “Lou” Wolf, a U.S. Army Sergeant, and The Rev. Wilbur “Bill” Albright, a Communication Technician First Class with the U.S. Navy discussed their personal experiences of military service during the Korean War on Monday, November 11, Veterans Day, at 7:00p.m. at the ArtsQuest Center in Bethlehem, PA. It was a full house for the panel discussion, “The Forgotten War: Stories from the Korean War”, which was moderated by retired U.S. Marine Corps Colonel and head of Lehigh University’s Veterans Association, Frank Gunter, and followed by a screening of the feature film “Unforgettable: The Korean War.”

Check out the video below to view the full interview!

Richard “Dick” Reider, of Steelton, served in the U.S. Army for approximately two years. A graduate of Keystone College, he was an engineer for Air Products for 42 years after which he retired and worked for AARP as a classroom driving instructor. An active 88-year old, he plays golf twice a week and exercises at the Air Products gym three times a week. He lives at the Terrace at Phoebe Allentown with his wife Joan and has two grown children, Richard and Annette.

Louis “Lou” Wolf, of Northampton, served in the U.S. Army after which he pursued a career as a high school social studies teacher, coach and athletic director for over 30 years. A graduate of East Stroudsburg University, he taught and coached for the Parkland School District from 1961-’67. In 1968 he returned to his alma mater Northampton High School until he retired as the beloved athletic director where a field and athletic scholarship are named after him. Wolf, who lives at the Terrace at Phoebe Allentown, survives his wife Elsie who passed away ten years ago. He has two grown daughters, Jane and Kathy, who are also educators.

The Reverend Wilbur “Bill” Albright, of North Catasauqua, served in the U.S. Navy for eight years after which he worked as a fabricator. In 1967 he attended the Lancaster Theological Seminary where he received his Masters of Divinity Degree. Recently retired, he served as a pastor for the United Church of Christ for more than 30 years at various churches throughout Eastern Pennsylvania. He and his wife Phyllis live at the Terrace at Phoebe Allentown and have two grown children, Kathy and Dale.

The event, which was free to attend, was also taped and rebroadcast on PBS39.  The SteelStacks’ Veterans Day event was presented by Embassy Bank and Phoebe Ministries and made possible through a partnership between Lehigh University Veterans Association, ArtsQuest, and PBS39.

Thank you to Frank Gunter, retired U.S. Marine Corps Colonel, for leading the discussion, and Terrace residents Dick Reider, Lou Wolf, and Bill Albright for doing such an incredible job as members of the evening’s panel.