Many Phoebe residents have exciting stories to tell and share about their lives. This March, Phoebe celebrated Women’s History Month by featuring the history of four women. 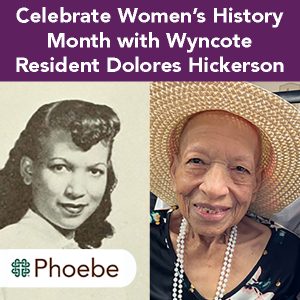 Dolores Hickerson, a resident at Phoebe Wyncote, made history in 1947 as one of the first African American students to live on the Indiana University of Pennsylvania (IUP) campus. Hickerson faced discrimination from businesses in the surrounding town, such as the movie theater and local dairy restaurant, in addition to receiving pushback from the Dean of Women regarding living on campus.

In the 2001 Fall edition of IUP Magazine, Hickerson says that her “mother and I met all of their negativity with ‘stalwart resolve.’” She did not let any of these discouragements dissuade her from moving forward on campus, and she graduated with a Bachelor of Science in Music Education. She taught for 38 years, both in the Philadelphia public schools and in Altoona.

“In pursuit of that education and early employment…I faced and had to deal with much negativity and disappointment due to bias, discrimination, and segregation, but like most African Americans of my generation, I did not give up,” she wrote. Please click here to read a brief memoir that Hickerson wrote about her early life. 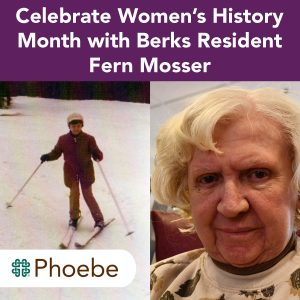 Fern Mosser, a resident at Phoebe Berks, made personal history by beginning to ski in the early 1960s—and didn’t stop until the age of 86! Mosser skied alongside Olympians and United States Champion skiers, but her proudest accomplishment was being able to ski with her children, grandchildren, and great-grandchildren.

Mosser traveled across the country, traversing slopes in Colorado, Utah, and California. Closer to home, she and her husband, Dick, and their five children, would visit Sharp Mountain. Located in the heart of the coal region in Pottsville, Sharp Mountain was a small ski area with five slopes and trails. Sharp Mountain closed in the 1970s, but Mosser continued to ski at resorts in the Pocono Mountains and Vermont. Mount Snow and Mount Okemo Mountain, both located in Vermont, remain two of her family’s favorite and most frequently visited ski slopes.

Mosser smiles when she recalls the length of time it took to get all five kids’ ski boots on. Ski boots were lace-ups, so it was quite a process! Unfortunately, Mosser does not have video of her skiing, however, this video shows what it was like skiing at Sharp Mountain in the early 1970s. 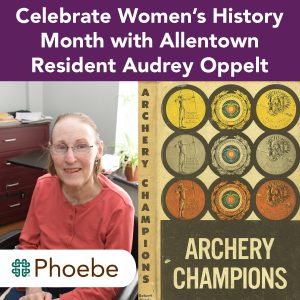 Audrey Oppelt, a resident at Phoebe Allentown, was a nationally ranked archer and competing member of the United States Archery Team. Audrey learned how to shoot a bow and arrow from her dad, an avid archer himself, who began teaching her at 12 years old as a form of therapy after she was diagnosed with juvenile rheumatoid arthritis.

By age 16, Audrey was ranked number one for Women’s Free Style during the 1968 National Archery Association Championship.

Audrey is listed in the 4th Edition of Archery Champions book. 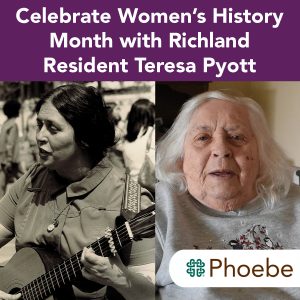 Pyott participated in The Philadelphia Folk Festival for many years as a programmer, meeting many famous singers. Some of her favorites were Bob Dylan, Judy Collins, and Pete Seeger, who, she explains, “would never accept payment.”

“One of my favorite people was John Denver,” Pyott recalls, and remembers first meeting him at a friend’s party.

She also performed at The Philadelphia Folk Festival, as she was a folk singer and musician. She was best known in Philadelphia for her sea chanty renditions in The Liverpool Judies and Outward Bound groups.

This article in the Washington Post from August 28, 1981, describes what a weekend at the festival is like and includes a quote from Pyott about how she tried to expose the audience members to new music.

These stories are just a few life experiences of Phoebe residents. For more information about becoming a resident at any one of Phoebe’s communities, please visit https://phoebe.org/communities or call 610-435-9037.