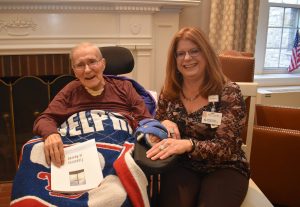 If you’re in the market for a good story, you can find Ray Lane on the Lehigh Square neighborhood of Phoebe Allentown sharing his animated experiences about Muhlenberg basketball and Dubbs Church!  So when Dr. Tom Renaldo, Physician for Phoebe Allentown, was approached by Susan Hansen about her reminiscence project he knew exactly who to recommend.

At 90, Ray can still tell you specific details about childhood encounters –  like the time his fox terrier Mitsie followed him into a corn crib and fought off a rat! “I crawled on my hands and knees into the corn crib filled with stock for the winter,” Ray explains with palpable enthusiasm. As a six-year-old, Ray wasn’t the only creature crawling through the corn – he encountered a rat – which Mitsie then attacked! “You’re not going to hurt my pal Ray Lane!” he says, describing Mitsie’s thoughts. According to Ray, Mitsie grabbed that rat by the neck until it “squealed and squealed”. His protective fox terrier killed the rat, but Mitsie was bitten on the paw and “hobbled around for about two weeks”. 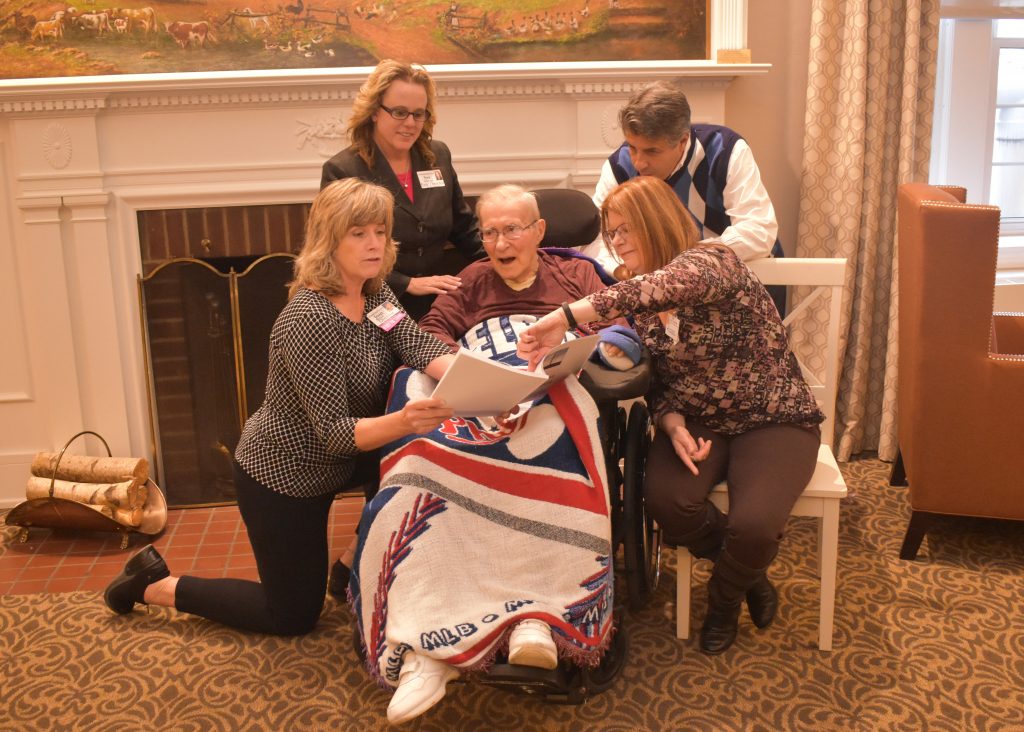 Ray’s Mitsie story was among many shared with Susan, who’s a Medical Education Evaluation Specialist for Lehigh Valley Health Network. “Reminiscing is an important process for people at the end of their life”, she says. “Their brain needs to download stories and take stock of their life.” During a formal interview process, she partnered with Ray in what would be the capstone for her Certification in Reminiscence and Life Story Work through the University of Wisconsin. “The purpose of the interview is to validate the storyteller through reflective listening”, she explains. Susan recorded twelve hours of interviews over seven visits with Ray then transcribed them into a bound book that she presented to him. In addition to completing a hands-on interview as a final practicum, the certification includes studying past contributors in the field of reminiscing and life review and learning techniques and strategies for conducting safe and successful interviews.

Susan asked Ray’s permission to present his daughter Donna Jackovitz with a copy of the 145-page manuscript entitled, “Treasures in Heaven: Memories of a Lifetime as Told by Ray Lane”. “I’ve heard these stories all my life,” says Donna. “He loves to share.” Susan explains to Donna that the manuscript facts are not important. “They may be different from what you remember. The key piece of reminiscing is that the person engaged in life review needs to share what’s important to them and how they experienced it.”

Meanwhile, Ray continues sharing his wonderful stories. If you stick around, you’ll hear about the history of his beloved Dubbs Memorial United Church of Christ in Allentown, where he played an important part in Sunday school, fundraising, and ultimately as an elder and Muhlenberg College, where he voraciously follows the football and basketball teams. While many engage in life review quietly in their thoughts, Ray Lane shares his through storytelling spreading his contagious joy with his colorful life experiences, cultural passions, and humorous wisdom.