Phoebe celebrated National Nurses Week from May 6 – May 12 and National Skilled Nursing Care Week from May 8 – 14, 2022. In addition to on-campus celebrations at each of the Phoebe locations, Phoebe highlighted retired nurses on their Facebook and LinkedIn pages, along with some of their favorite nursing staff members.

Featured stories included retired nurses Fran Sletvold and Shirley Hawk, who collectively have 102 years of service as nurses. During their nursing tenures, both residents worked at the Allentown Osteopathic Hospital, which became St. Luke’s Allentown Campus. They reconnected when they moved into independent living at the Terrace on Phoebe’s Allentown campus.

Also highlighted are Phoebe Richland residents Elaine Balinski and June Moyer. Both retired nurses worked at Grandview Hospital in Sellersville for over 30 years. They posed for photos with Phoebe nurses Lisa Reilly and Michele Sciss, who have a collective 30 years of service.

Some retired nurses at Phoebe held careers in nursing for as long as 64 years. Phoebe’s featured nursing employees range from newly certified Temporary Nursing Assistants (TNA) with three months of service, to Registered Nurses (RN) and Certified Nursing Assistants (CNA) with more than 40 years of service. When asked why they decided to become nurses, everyone expressed their love of caring for people.

Nurses played a pivotal role in Phoebe’s inception. Founded in 1903 as a “deaconess home,” Phoebe provided specialized training for women in religion and nursing. In 1904, Johanna M. Baur, a trained deaconess for 12 years and Phoebe’s first “house mother,” designed the course of instruction for the women seeking education in nursing. In the beginning, Baur ran the former Phoebe Home, now Phoebe Allentown, creating the foundation of knowledgeable care and dedicated service that Phoebe employees are still known for today.

On-campus celebrations for staff included company picnics, treats throughout the day, and company gifts were handed out.

For more information about a nursing career at one of our four Phoebe campuses, go to Phoebe Careers or contact Phoebe’s Human Resources Department at 610-794-5200. 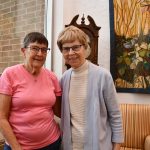 Fran and Shirley, both retired nurses and friends who currently live at Phoebe. 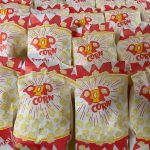 The staff was treated to some popcorn! 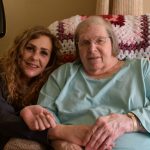 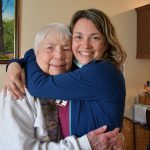 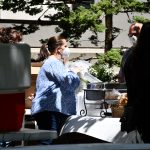 Staff at Phoebe Allentown enjoyed a picnic lunch on Wednesday!