More Than a Standing Chance - Phoebe

More Than a Standing Chance 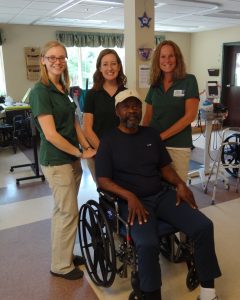 John Gilmore has worked hard his entire life—you could even say he’s a lifelong builder. He built a thriving business franchise from nothing after moving to the Reading, Pennsylvania, area in the 1980s. Before that, he and his wife built a log home by hand in the woods of Michigan. He built a loving, supportive, successful family now proudly boasting two sons and a daughter, and three grandchildren.

Today, he is working to build himself again from the ground up.

When he came to Phoebe earlier this year, John was suffering from the long term effects of limb-girdle muscular dystrophy (LGMD). He had been diagnosed over 15 years ago, but the disease was now laying waste to his limbs and his diaphragm, the latter filled with carbon dioxide. He contracted pneumonia and couldn’t walk. At age 68, a man who had played football and run track in high school was now effectively immobilized.

John was hospitalized, and when it came time to enter rehabilitation, he made it very clear that he wanted to be sent to Phoebe Berks. John had a personal connection to Phoebe going back to his earliest days living in Berks County. A year or two after moving to the Reading area and purchasing a ServiceMaster Clean franchise in 1988, he was brought on to do post-construction cleanup at the new Phoebe Berks Village now quickly approaching completion. He and his wife built a home in Wernersville around that time as well, becoming longtime neighbors of Phoebe until they moved to a one-story home in Sinking Spring after his LGMD diagnosis.

John says from his very first night at Phoebe Berks, he was immediately welcomed and comforted. “I was frightened when I came here, not knowing what was going to happen. The supervisor came in and talked to me and made me feel comfortable. Everybody rallied around me and made me feel like a better person.”

John’s therapy team launched him into a program of stability and strength exercises, such as leg lifts, chair lifts, walking with a walker, and some mobility and isometric exercises. “If it wasn’t for them, I wouldn’t be getting around the way I do,” says John. He stayed at Phoebe throughout the month of April, and has since begun outpatient therapy at Phoebe once a week for a 12-week program. In his third week of outpatient therapy, John reported he was “30 percent back in the right direction. There’s a lot more work to do.”

But he is, above all else, not only optimistic but profoundly grateful. He has to use an oxygen tank at night, but thanks to his therapy he can go the entire day without it. John follows a strict exercise program at home, too. “I think of everybody [at Phoebe] while I do it,” he says. “I think of everything they’ve been teaching me. It makes me want to do more. I want them to see what they did for me and how far I’ve come along because of their support.”

John also found inspiration and motivation in the other patients and residents of Phoebe Berks. “I see older people in here—people older than me—doing more than I am! And that’s a real push to me. If they can do it, I can do it, too!” he says.

His therapy is exhausting, but John wouldn’t have it any other way. “It’s rough but I’m seeing the gain by the way I’m bouncing back,” he says. “I see the happiness in my family’s eyes when they see me doing things I couldn’t do before.”

Reflecting on his experience, John credits his faith in God and his support team—his family and his therapists and doctors—with the progress he has made so far. “I found a great team and I’ll never forget them,” he says. “They make me feel special. They make you feel like you want to come here and that’s the difference. I’m thankful God sent me to Phoebe.”

Visit Phoebe.org/Berks to learn more about rehabilitation at Phoebe Berks.