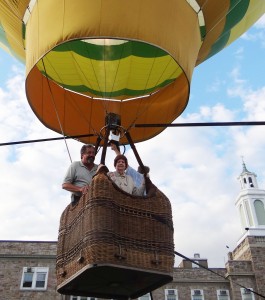 A vibrant member of the Phoebe community, Dorothy speaks on behalf of others at the monthly resident council meeting, serves as a greeter for new residents, and sends cards to those who are having birthdays, recovering from an illness or need some support.

Being over a century old has not impeded Dorothy’s activities one bit. In September, she was able to get in and out of a hot air balloon basket and ride above the Phoebe Allentown campus with her family! Dorothy also has a morning exercise routine in which she does high kicks while seated in a chair.

Dorothy is still particular about her appearance and sets out her outfits each night, coordinating jewelry and shoes to complement her clothing. She also decorates her private room at Phoebe for each holiday and season, making sure there is a fresh wreath on her door to boost the spirits of the other residents.

Dorothy grew up in the Mid-city section of Allentown near Sacred Heart Hospital. Her father worked at The Morning Call newspaper and her grandmother was a dress designer. She was married for 30 years before her husband passed away and she has one son, Chris. Her two grandsons are in college, Zach at Penn State and Tyler at Temple University. They think she is a “cool grandmother who tap dances.”

As one of only 13 members of the second graduating class of Central Catholic High School, Dorothy also received two years of business education in her high school education. She was hired by The Morning Call newspaper as an assistant in the circulation department upon graduation. She worked for the paper for 20 years in the 1930s and ‘40s and remembers staff parties on trains and special dinner events.

During her time working at The Morning Call on 6th Street in Allentown, Dorothy spent her lunch hours shopping at Apple Jewelers and Leh’s and Zohlinger’s department stores in the heyday of the downtown Allentown shopping district. She didn’t shop at Hess Bros. because the walk would take more time out of her valuable shopping hour!

After raising a family, Dorothy traveled multiple times to the Bahamas, New England and Canada. She saw many Broadway shows and had the opportunity to eat in New York’s Chinatown where she developed a taste for Chinese cuisine. Last year her 100th birthday party had a Chinese New Year’s theme, in honor of her favorite cuisine.

Dorothy is one of Phoebe’s many seniors living life to the fullest.