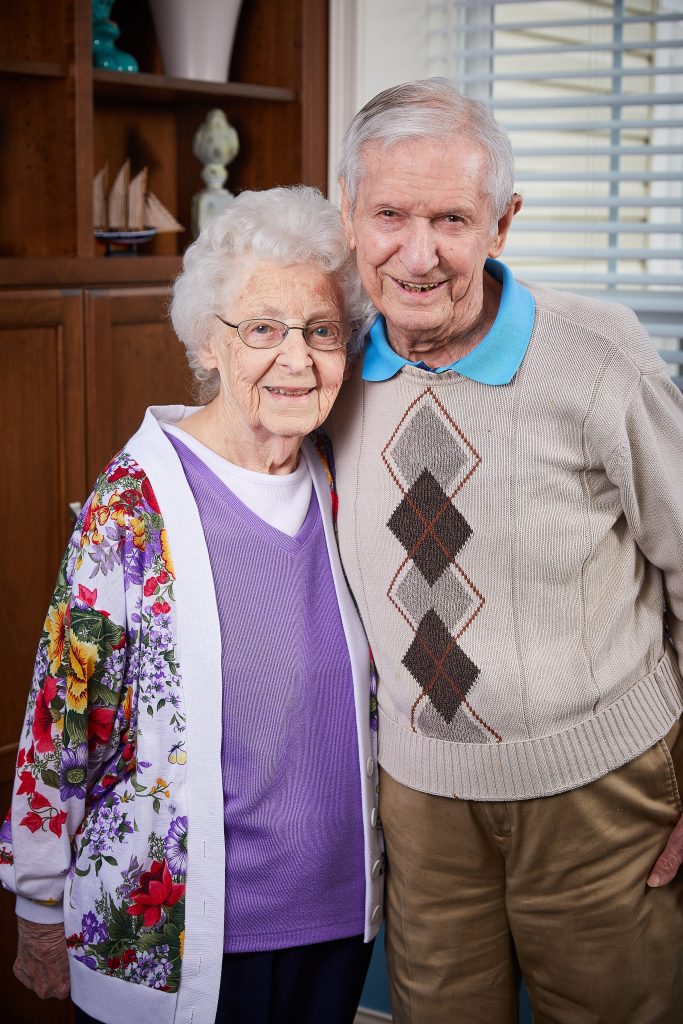 At 98 years old, Chester J. Westgate doesn’t let much get in his way—and he certainly doesn’t let his age stop him from volunteering at American Red Cross Blood Drives, which he has been doing for 13 years.

In March, Chester was invited to the American Red Cross National Awards and Recognition Dinner in Washington, D.C., to receive a Presidential Award of Excellence as a Blood Drive Volunteer for the Penn-Jersey Region. Chester and his wife Mildred—who live at Meadow Glen, the personal care community of Phoebe Richland—were thrilled to receive the news. “I’m 98 years old, this came as a surprise!” says Chester.

Three or four times a month, Chester catches a ride to the West End Fire Company to assist at the blood drives there, mostly registering people and directing them as they queue to donate. When he first started he was going more than twice a week, handing out snacks and drinks to donors. He coordinates the schedule of appointments with who shows up and who doesn’t, and makes sure everyone gets a pin for donating. When lines are long, Chester chats with donors, bringing water, and sharing status updates and his WWII scrapbook.

According to the Red Cross, Chester even has a donor following. During an extended absence when he was unable to volunteer, donors sent him cards wishing for a swift and safe recovery. His birthday is celebrated each year at blood drives and volunteers and donors alike attend.

Though the Red Cross offered to fly them in, Chester and Mildred opted to drive in with their daughter and her husband, embarking upon a series of events designed in the awardees’ honor as soon as they arrived in the capital. “It didn’t cost us one penny and the accommodations were wonderful!” says Mildred. “I was so glad [Chester] got to do this; it was such an honor for him.”

At dinner, Chester was presented with a glass trophy and a commemorative pin for the award, as well as another pin for the American Red Cross. He was the only awardee who received a standing ovation as he rose to receive his award.

The award ceremony did not fail to make note of Chester’s other achievements. He is a decorated veteran of World War II, with a French Jubilee of Liberty Medal for his service at D-Day, along with a range of other honors to his name. Two years ago he attended a tour of honor in D.C. for veterans of WWII and the Korean War.

Chester has always been hardworking—he often says of himself that he always had two jobs. While working in commercial printing for 38 years as a press operator and then foreman and superintendent, Chester also worked in two banks, a hardware store, and a high school as a mechanic. He was always called upon by neighbors to fix up doors, roofs, sinks, and plumbing problems, change gas to electric and back again. In the army he worked on cars and trucks, supervised convoys, and got himself promoted to sergeant before the end of the war. He and his family moved to Quakertown in 1966, and he and his wife moved to Meadow Glen in 2018. These days he leaves the mechanics and fixing to the maintenance team at Meadow Glen, and focuses his energy on volunteering and making warm winter hats for cancer patients and anybody else who needs one.

In his lifetime, Chester has had 18 operations, a stroke, and two heart attacks—the only visible evidence of which is a lightweight walker he uses for anything longer than a brief trip across his suite. He is straight-backed and clear-eyed, and an active part of life at Meadow Glen. The dining team rely on his and his wife’s opinions of new items for the community menu. The staff members love to listen to his stories about the war. Chester will turn 99 in July—his wife will be 100—and even at that age it’s hard to believe he’ll ever give up volunteering. According to him, it certainly isn’t on the horizon any time soon.