CFO of Phoebe Nominated for CFO of the Year - Phoebe

CFO of Phoebe Nominated for CFO of the Year 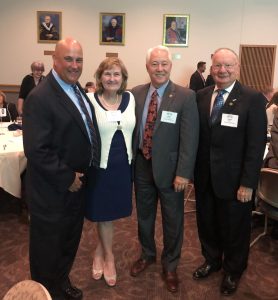 Allentown, PA – Robert “Bob” Richards, Chief Financial Officer for Phoebe Ministries, was nominated for CFO of the Year of a nonprofit organization with over 75 people at the Lehigh Valley Business CFO of the Year Awards on Wednesday, September 11, at DeSales University where more than 250 people gathered to honor the top financial executives of the Greater Lehigh Valley.

“We are thrilled that Bob has been honored with this nomination. His expertise in health care financing has been instrumental in designing controls that support Phoebe’s mission of charity care while enabling us to move forward as a top provider in the region,” says Scott Stevenson, CEO Phoebe Ministries.

A resident of Lebanon, Richards graduated from Philadelphia University (formerly known as Philadelphia College of Textiles and Sciences) with a Bachelor of Science degree in accounting. He is a past chair of the Lebanon Valley Chamber of Commerce and past treasurer of Cornwall – Lebanon School District’s Falcon Foundation. In addition, he serves on the Subscribers Advisory Committee for CHART, a Hospital owned malpractice risk retention group.