Rev. Dr. Kramer-Moyer Recognized for 50 Years of Ordained Ministry with the UCC - Phoebe

Rev. Dr. Kramer-Moyer Recognized for 50 Years of Ordained Ministry with the UCC 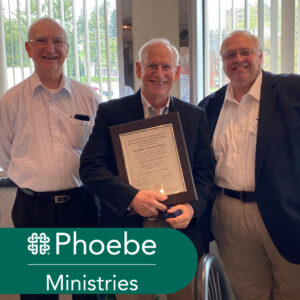 Congratulations are in order for the Reverend Dr. Allan Kramer-Moyer, who was presented with a plaque recognizing 50 years of ordained ministry in the United Church of Christ. Reverend Cliff Herring, chair of the Clinical Pastoral Education (CPE) committee at Phoebe Ministries, and Reverend Scott Brooks-Cope, Director of Pastoral Care at Phoebe Ministries, presented Kramer-Moyer with the plaque on April 15 on behalf of Governing Board member Reverend Dr. Bonnie Bates, and the Penn Northeast Conference.

Kramer-Moyer served as the Pastoral Care Program Director at Phoebe Ministries in 1992, when he initiated the institution’s CPE program. The CPE program enables prospective clergy members to receive on-the-job training while ministering to the residents at Phoebe. In 1997, Phoebe Ministries became accredited as a site for preparing seminarians, ordained clergy, and qualified lay people to give spiritual guidance and comfort.

During his tenure, Kramer-Moyer was named Vice President of Pastoral Care Services for Phoebe Ministries and helped grow the pastoral care team. Following Phoebe’s directive, Kramer-Moyer helped to expand the number of chaplains from one to five, including himself.

Kramer-Moyer enjoyed serving the residents at Phoebe, and listening to their stories. He was quoted in a Morning Call article in 1998 saying that the residents are “spiritual treasure chests,” who “are our elders, and they have things to teach us, wisdom to share, spiritual truths.” Kramer-Moyer will continue to enrich residents’ lives as he becomes one of the first residents of Chestnut Ridge at Rodale, Phoebe’s newest senior living community.