Celebrating 50 Years of Serving Seniors at the Phoebe Apartments - Phoebe

Celebrating 50 Years of Serving Seniors at the Phoebe Apartments 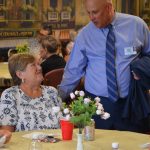 Phoebe COO Bob Richards with a resident of the Phoebe Apartments. 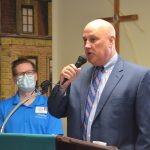 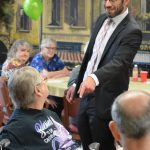 Representative Mike Schlossberg talks with a resident at Phoebe Apartments. 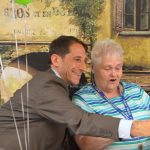 Mayor of Allentown, Matthew Tuerk, with a Phoebe Apartment resident. 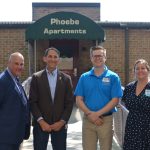 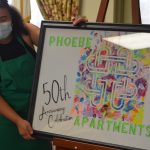 A sign that was created by residents of the apartments at Chaplain Jameson Baxter was unveiled at the celebration. 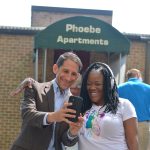 Allentown Mayor Matthew Tuerk with an attendee of the 50th Anniversary celebration at the Phoebe Apartments. 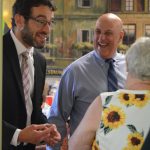 On Friday, September 9, Phoebe Ministries celebrated the 50th Anniversary of the Phoebe Apartments. Dedicated in May of 1972 as the first low- to middle-income housing for Lehigh Valley residents ages 62 and older, Phoebe Apartments is currently home to 143 seniors.

Residents of the Phoebe Apartments, Phoebe COO Bob Richards, and other Phoebe employees celebrated the dedication of the apartments with a cook-out that was attended by State Representative Michael Schlossberg and Allentown Mayor Matthew Tuerk. Games and entertainment were also provided for those in attendance.

The concept for Phoebe Apartments was developed in the mid-1960s by Phoebe’s leadership, who saw the overwhelming need in the Allentown and Lehigh Valley community for housing for independent seniors with low- to moderate-income. After years of planning, Phoebe broke ground in the fall of 1971, and at the start of construction, had already received many rental applications. By February of 1972, both buildings were complete, and by May 22, 1972, all units were occupied during the formal dedication of the apartments.

Today, residents of the apartments are grateful to Phoebe for providing them with not just a place to live but for giving them a community to be a part of. The social room, game room, and library are buzzing with activities that include educational programming, health presentations, and guest speakers. Residents also like to help plan parties and social events, in addition to attending movie screenings, art activities, and religious services led on sight by Phoebe’s pastoral care staff.